How to Create Zoom Blur Transition in Adobe Premiere Pro

Transitions between shots in filmmaking are ways to transmit a feeling to the audience. By using a transition, you tell your audience how to perceive the relationship between scenes, how they match together and how these scenes are going to walk them through the story. So choosing a transition for a scene is considered crucial in editing but what’s also carrying importance is the way you execute it as in editing many things are subjective and can be done in different ways.

One of the common transitions that help you create a special flow between your scenes is the Zoom Blur transition. Using this transition is especially common when you want to transition into a closer and more detailed shot of the same location but you can also apply it to other types of shots. So let’s talk about this transition and how to get it done as there are several ways to go with it.

One of the ways you can do Zoom blur transition is by using two effects that are Lens distortion and Transform and then setting some special settings for them.

So the first thing you should do is to find the Lens distortion effect from the Effects panel and apply it to the video you want to transition from. Then choose how fast you want the transition to be, I’ll go with ten frames for both sides, the first and second clip.

Now you have two keyframes at the beginning and end of the transition in the first clip, which starts from 0 to -60. By changing the Curvature, you create a blur effect in your video but since this is supposed to be a Zoom blur transition, you also need to create a zoom in.

To do this, choose the Transform effect from the Effects panel and apply it to the video. 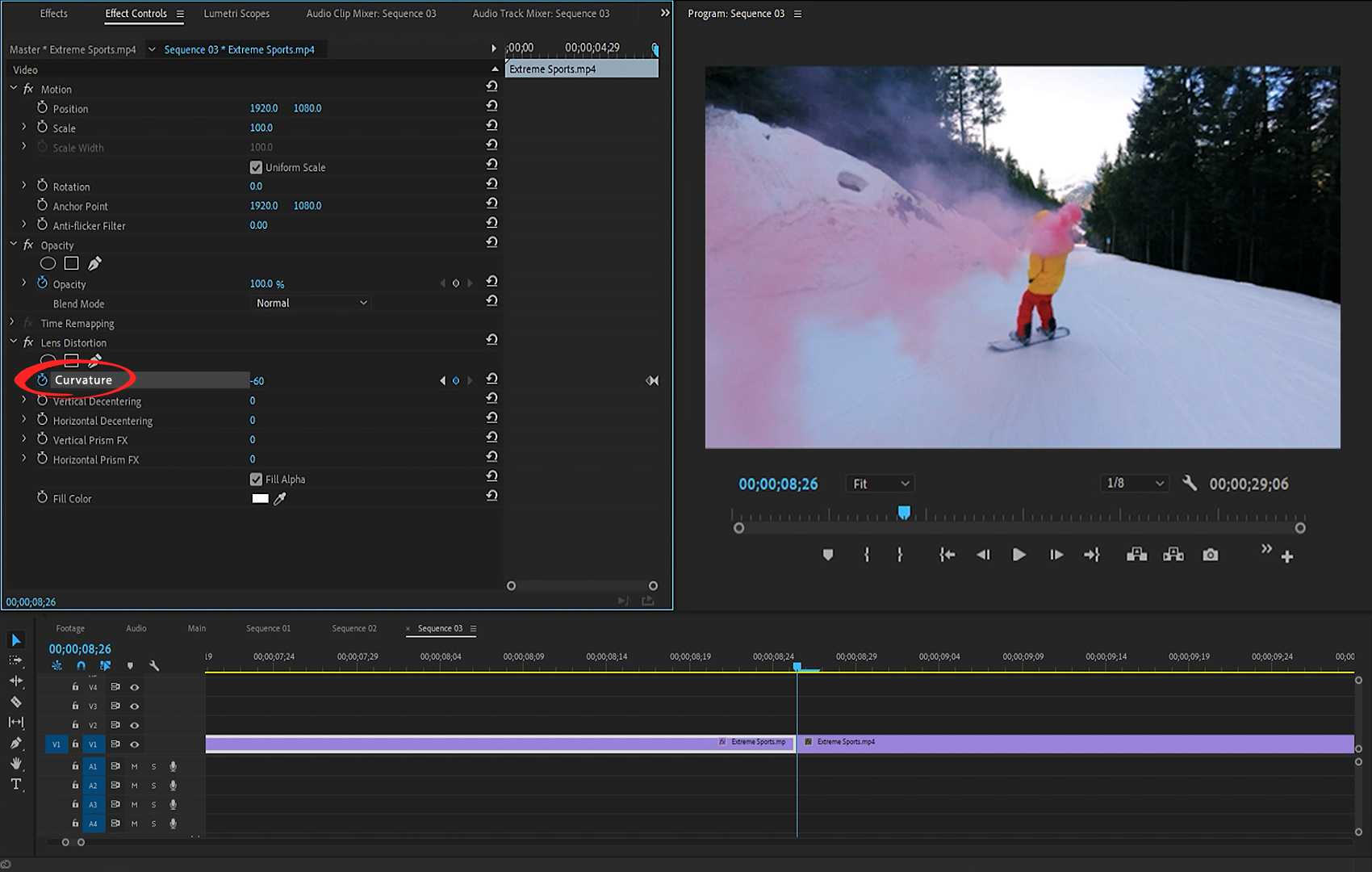 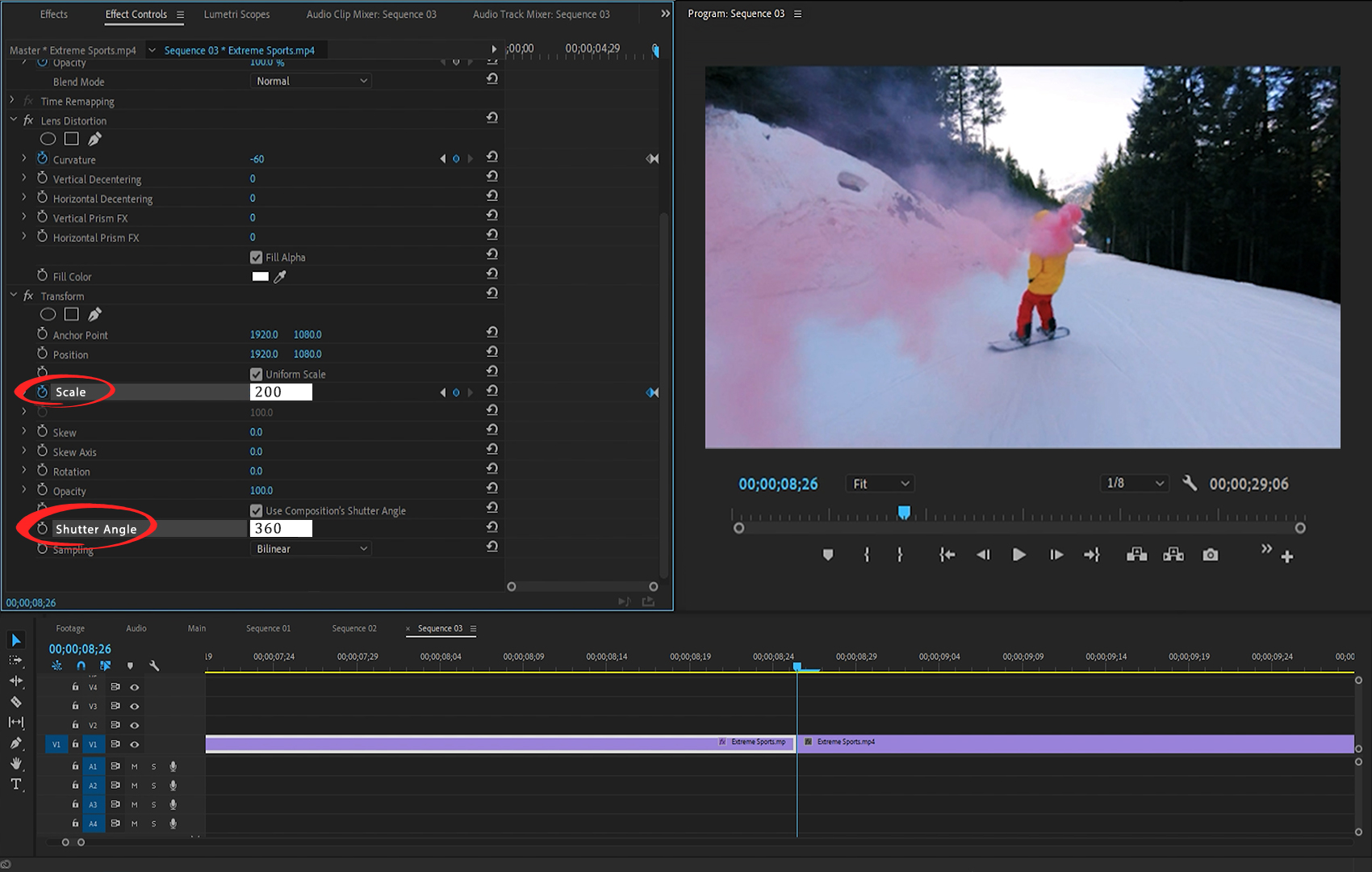 Basically what we should do is using the same effects but with reverse settings. So again add Lens distortion to the second video. This time at the first frame of the second video, set the Curvature to -60 and click the toggle and go ten frames forward and reduce it to 0 again. 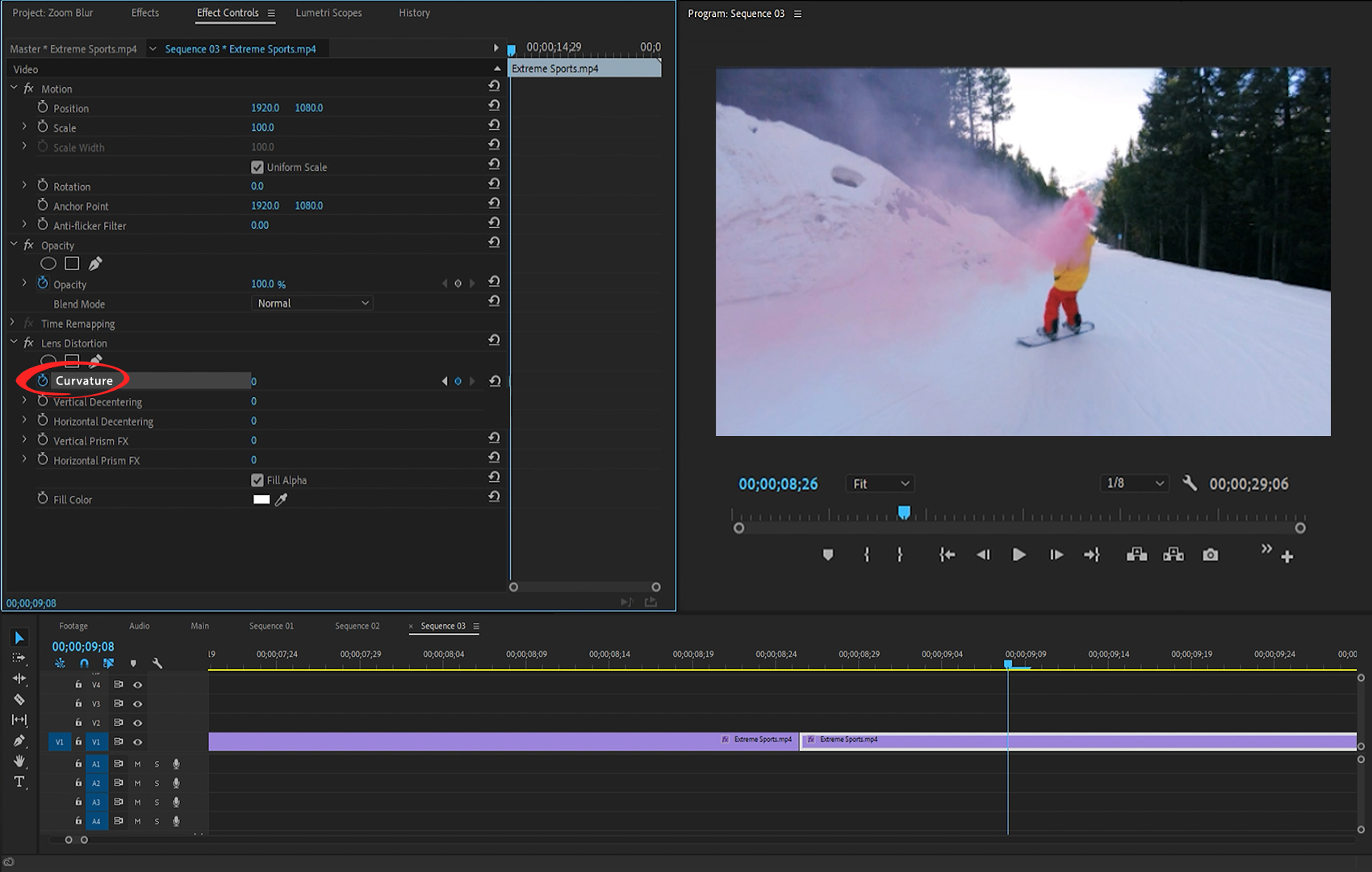 Under Lens distortion find Curvature
Then add the Transform effect to the video to create the zoom out, so set the Scale to something near what you’ve set on the first video which in my case is 200. The reason we do this is that we want to start the scene with the same effects that we ended the last one. Then click the toggle behind the Scale and move ten frames forward (or how many frames you decide your transition happen during it) and set the Scale to 100, which is the normal Scale. Also, don’t forget to set the Shutter angle to 360 to have more blur as the previous one and keep in mind that the distance between keyframes determines the speed of the transition in both scenes. 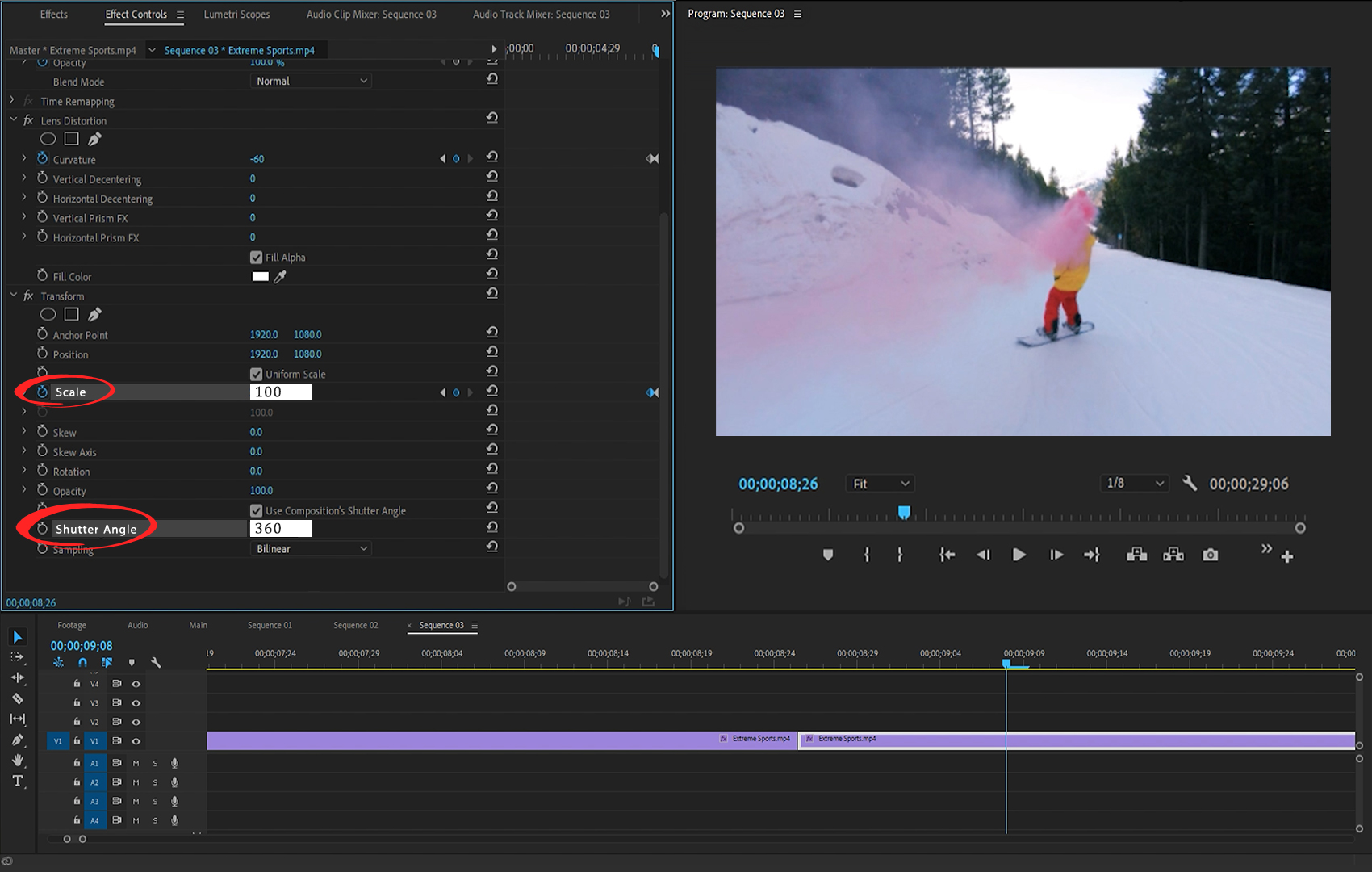 Using scale and shutter angle, under the Transform effect

Another way to apply Zoom blur transition is by adding an adjustment layer and applying a Transform effect to that. 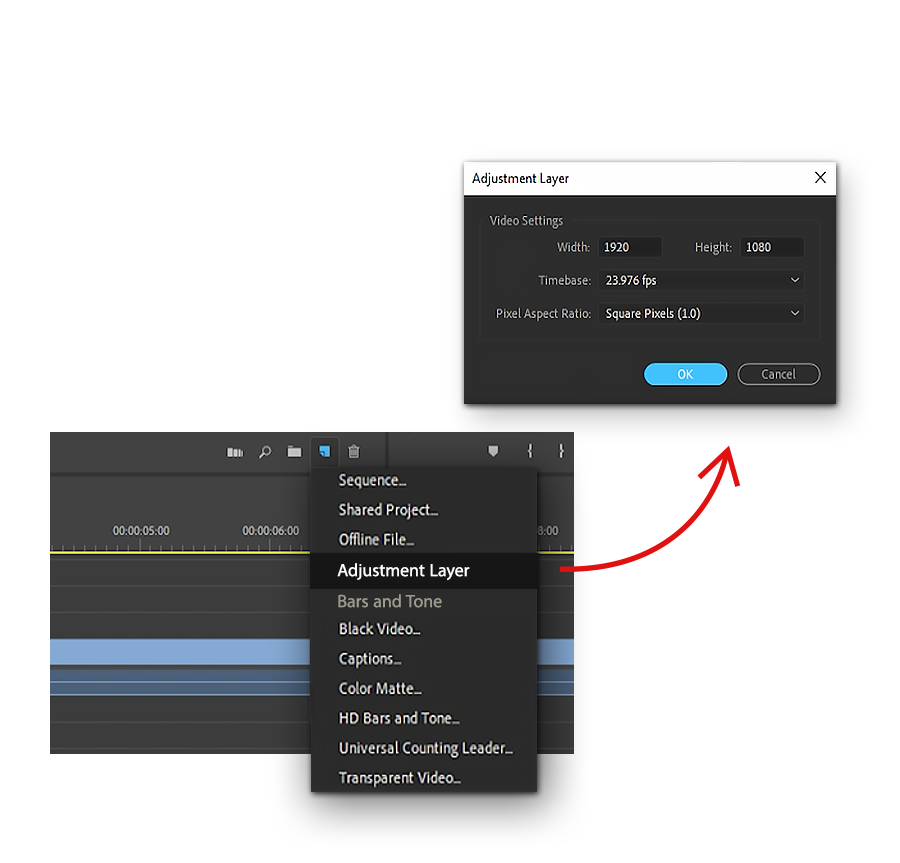 Creating an Adjustment Layer
Again in this method, if you change the shutter angle to 360, you’ll create a nice blur in your shot. If you want to apply the same transition to the other shots, you can copy the adjustment layer and stack it on top of the other shots but before that, make sure you add a marker in the middle keyframe that has the maximum zooming to be able to set it exactly where the two shots meet.

Using an Adjustment Layer and Replicate Plus Mirror Effects

Well, this one is a little bit different from the other two as the result is not a zoom-in zoom-out transition. In this method, what you create is a double zoom-in transition.

To do this, add two adjustment layers on top of the clips. One layer should start from the first shot and continue to the next shot(like the way we did it in the previous method) and the other layer starts from the second clip.

After that, add the Replicate effect to the second layer (the adjustment layer for the second shot) then go to effects control and change the count to 3. This way, you’ll have a grid, like this one: 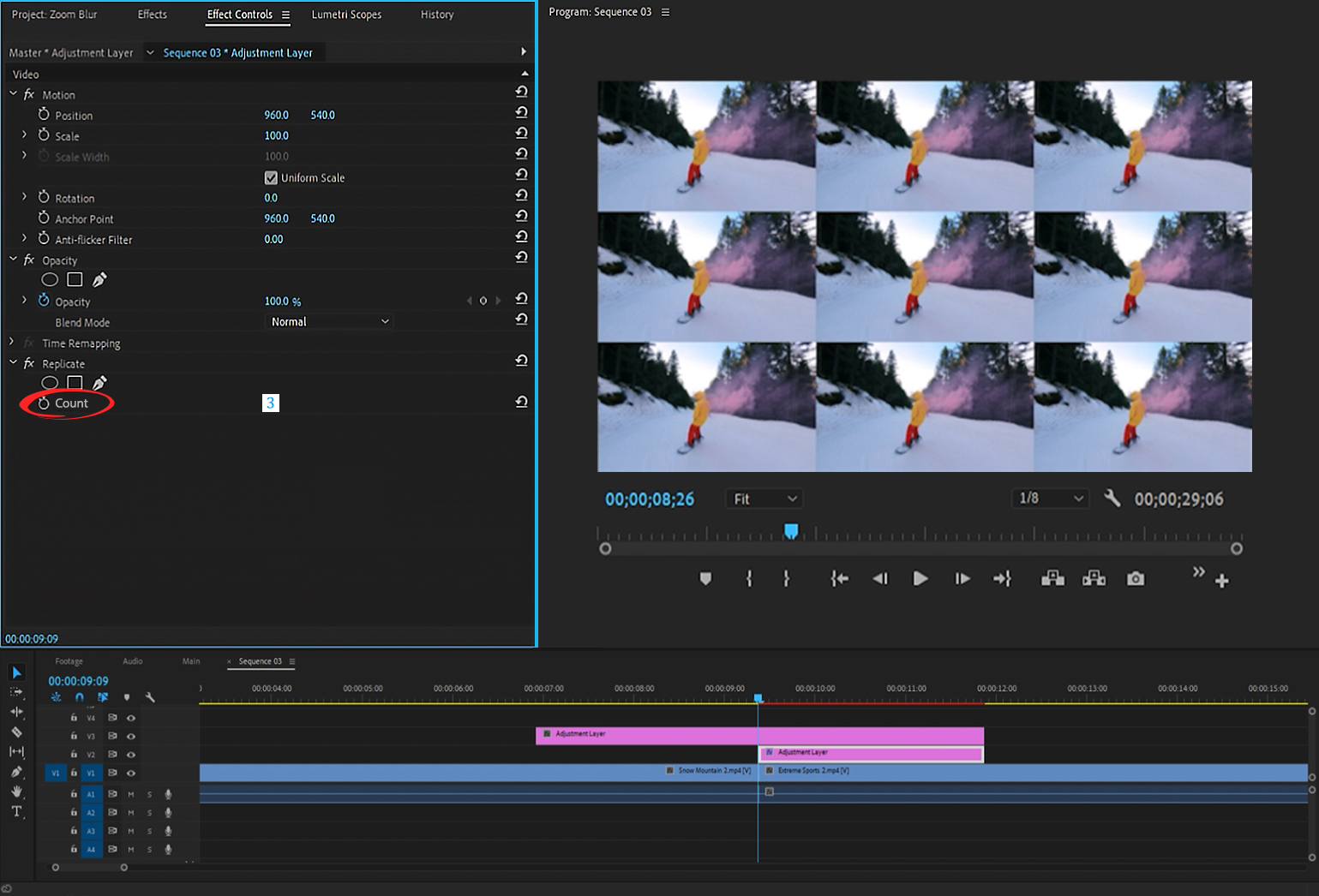 Under Replicate, Change the Count to 3
Now you have to make the edges of the shots disappear, so here’s where we use the Mirror effect several times. After you’ve added the Mirror effect to the second adjustment layer, what you should do is to go to the effects control panel and set the Reflection angle to 90, then you’ll see that the bottom edge will disappear.

To remove the upper edge, add the Mirror effect again, and set the Reflection angle to -90 and in Reflection center, change the Y factor (the right one) to move the frame up until the edge disappears.

Now let’s remove the right edge by adding the Mirror effect once more and then drag the X factor to the left until the right edge is mirrored. You don’t need to change the Reflection angle for this one.

Then add the Mirror effect for the last time and set the Reflection angle to 180 and move the X to the left until it’s done. 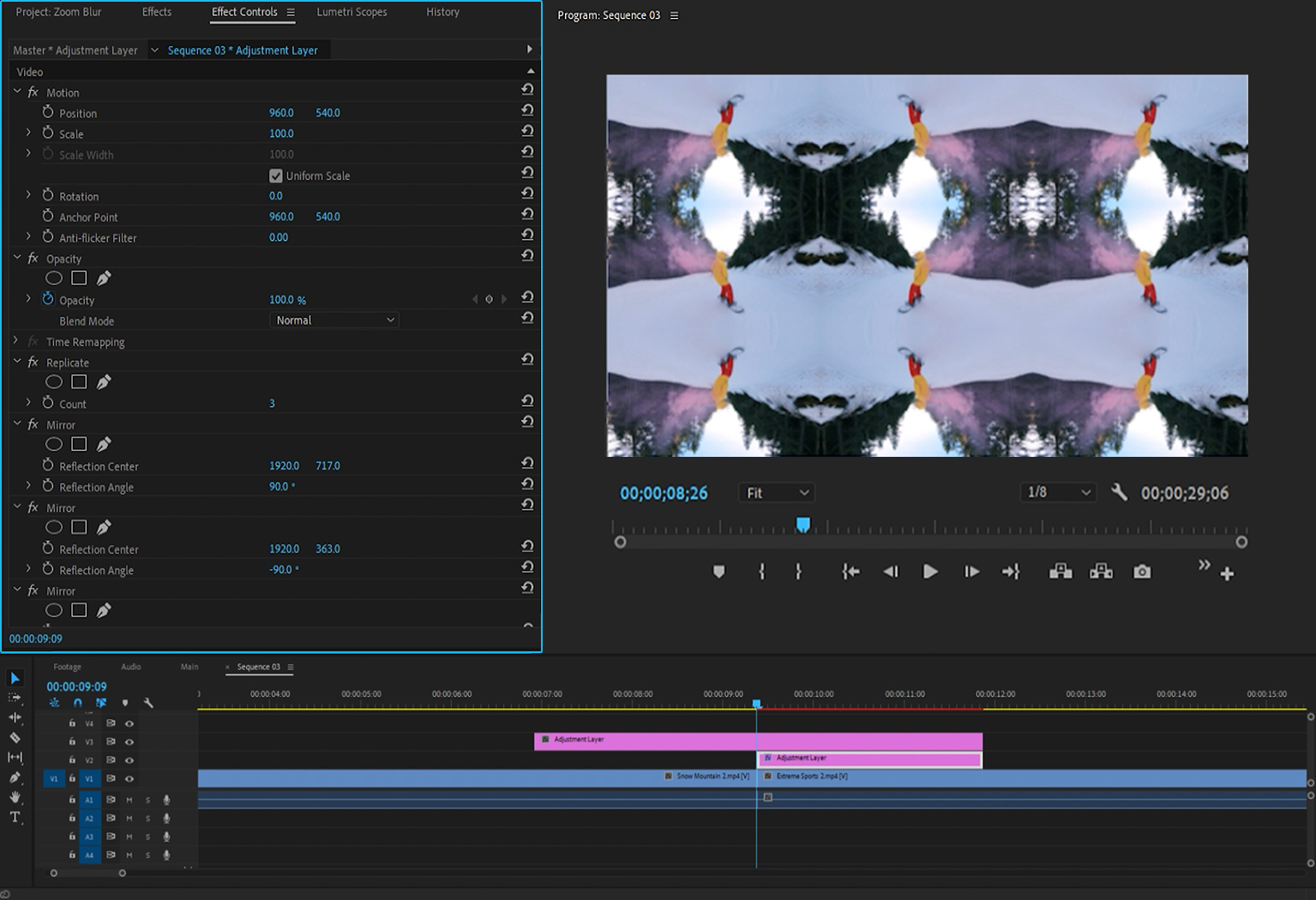 Set the Reflection Angle for each Mirror Effect
Now that you have no edge in your grid it’s ready for zooming in which gets done using the Transform effect. So add the Transform effect to the first adjustment layer and as we did before, you should set two keyframes for scale. This time we need two keyframes to set the beginning and end of the zooming. Let’s imagine you want your transition to happen in 12 frames, so what you should do is to set the first keyframe six frames before the cut (or the middle of the adjustment layer) at 100 and set the next keyframe six frames after the middle, at 300. As we tripled the shot, we need the Scale to be tripled too, to get our normal shot back when zooming is done. 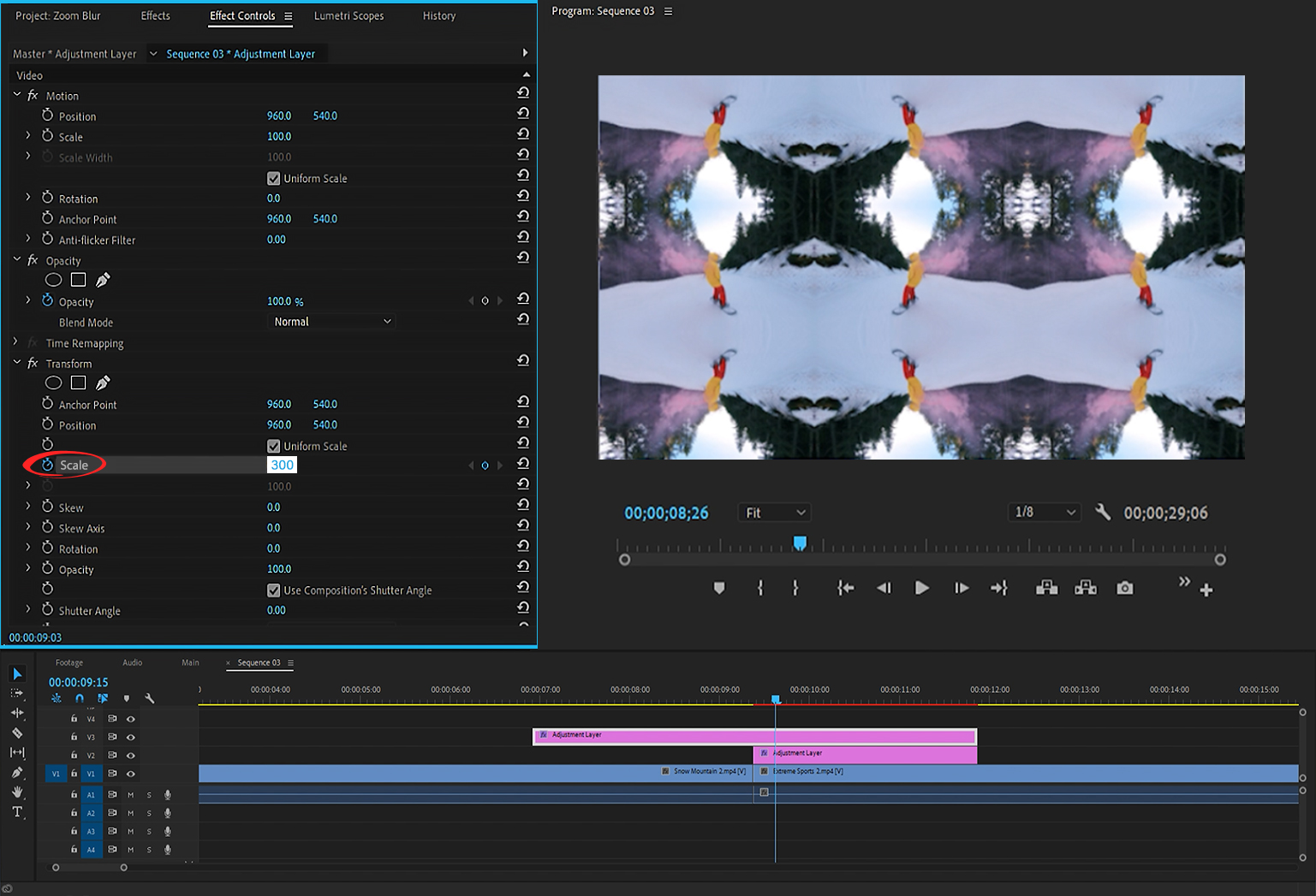 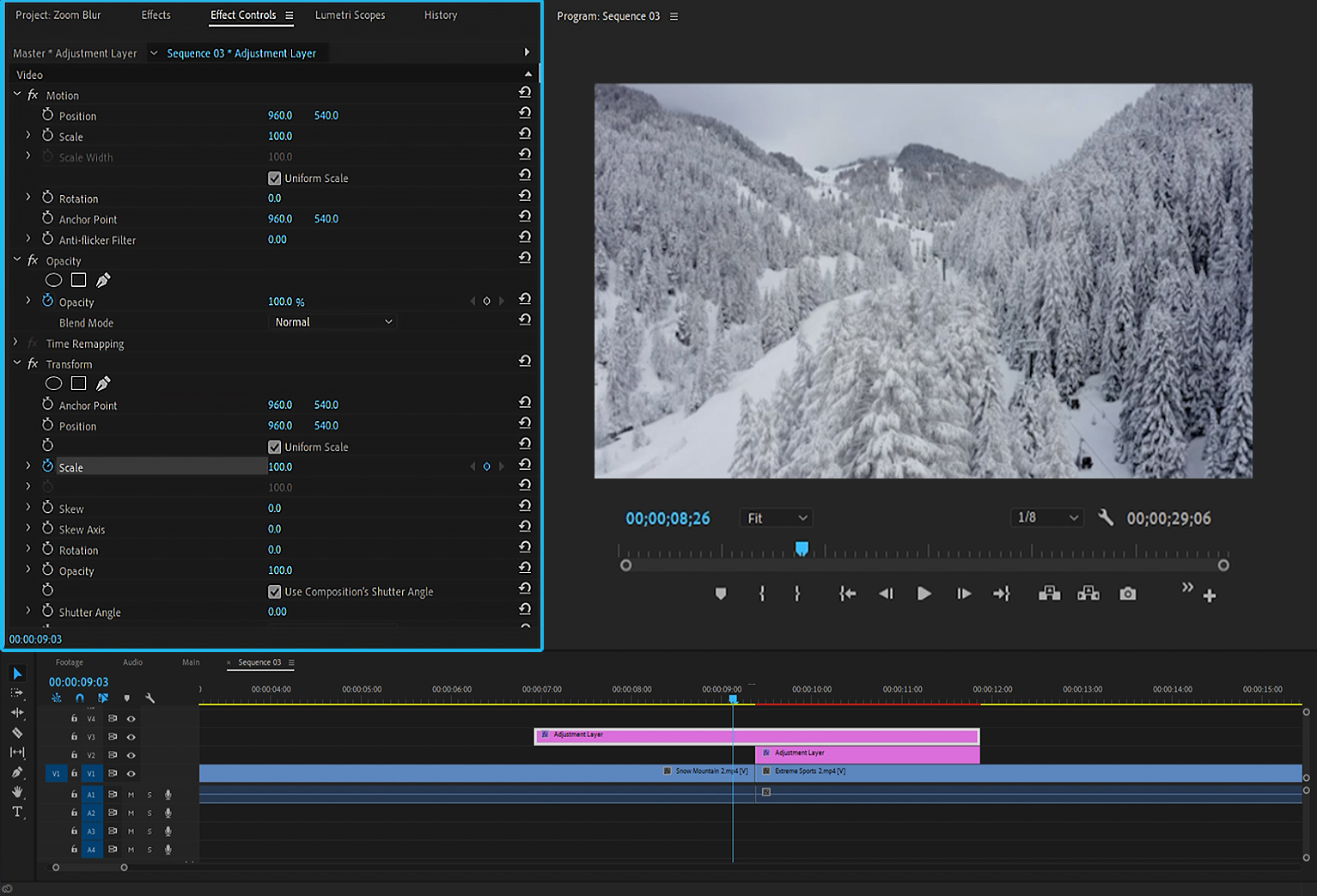 Set keyframes for scale
Now you have to set the Shutter angle between the keyframes to 360 in order to create the blur effect. As the last step, you can select the keyframes, right-click and select Bezier to smoothen the transition. You can do the Bezier on keyframes, in all of the ways we tried for creating a Zoom blur transition. 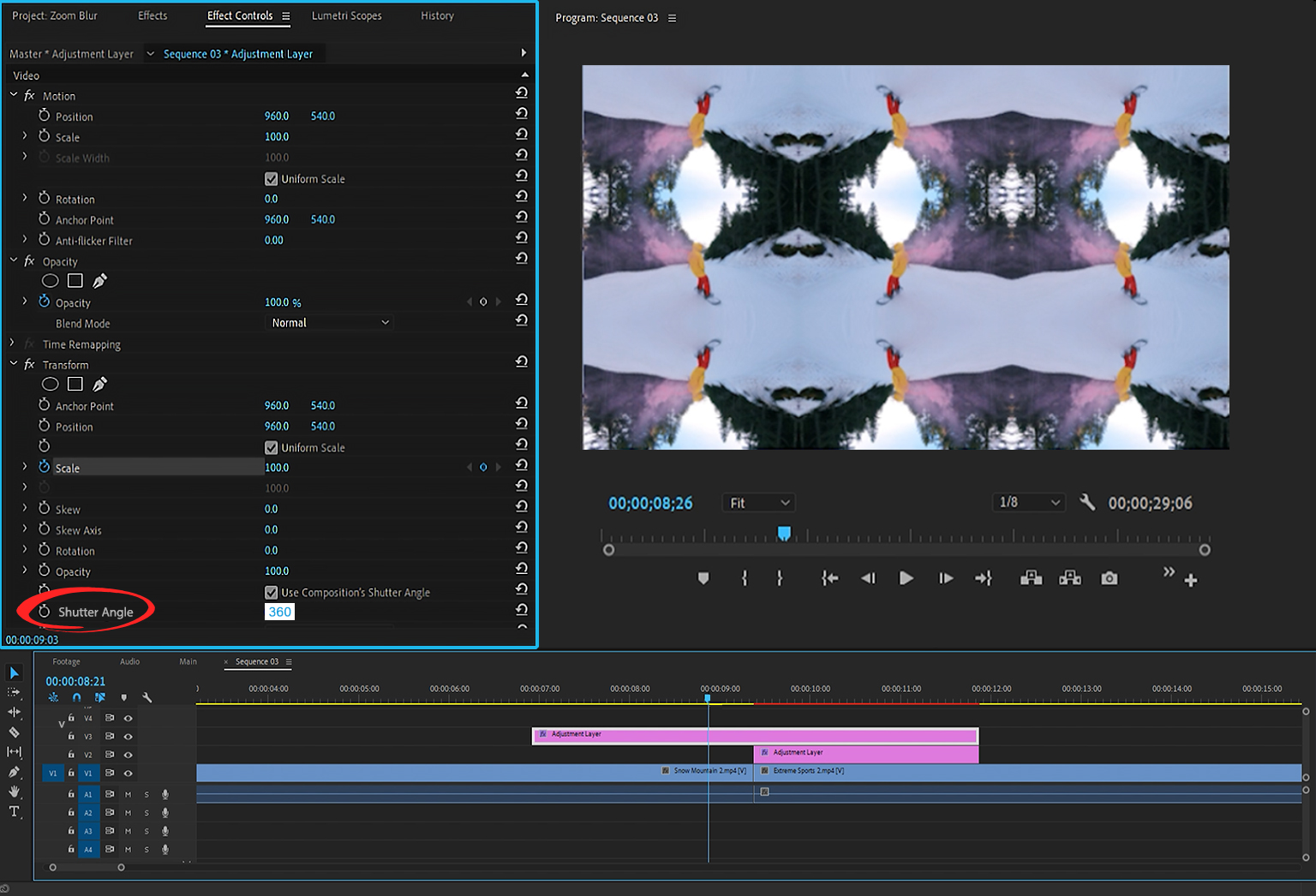 Set the Shutter Angle to 360
At the end of the day, if you want to spend a little money and not to deal with these settings and effects, you can get a Zoom blur transition template to simply add it to your shots. But personally, I would rather play with the possibilities of the Premiere Pro to not only get the exact result that I want but also to know what is what in this ecosystem, because it leads to inventing new ways for every task. So don’t forget to investigate and search for everything and most important of all, be creative!