A good video is like a fine dish, it is a combination of good material, tasty spices, and of course a touch of love! Only when all these are present you can say, hey I have an amazing video to share. So today I have decided to talk a bit about some of the spices, which are the “Effects”.
The idea came to me the other day when working on a video and suddenly realizing, among so many different Premiere effects, I generally use just a select few. Yes I always try to experiment with new things, that’s how I found my favorite ones, but there is always a list of usual suspects that always pop up. So I thought maybe it would be good to share some of my personal ones with you guys. So let’s see what I’ve got.

First on the list is Gaussian Blur under Blur and Sharpen. The Gaussian actually comes from the world of mathematics and statistics! In Layman’s Terms, it means the normal and natural distribution of stuff. Our stuff here are the Blurry stuff, so our blur is distributed naturally.

Anyway, dragging and dropping the effect on our footage is the first step. Then by going to effects control we can modify the effect. For example, I can create a mask to specify the part I want to blur out because completely blurred out footage is generally weird! But cool ways to use a fullscreen Gaussian Blur may include using it for fade in or fade out at the beginning or end of the video or maybe trying to give the impression of waking up from a dream. In those instances, you can keyframe the blur between 15 and 0 based on the situation.

Working with masks is incredibly easy, I can keyframe them to follow the subject around, or change the feather and blurriness. All the cool stuff. Try to get creative with it and tweak it to your taste. Make it your own! 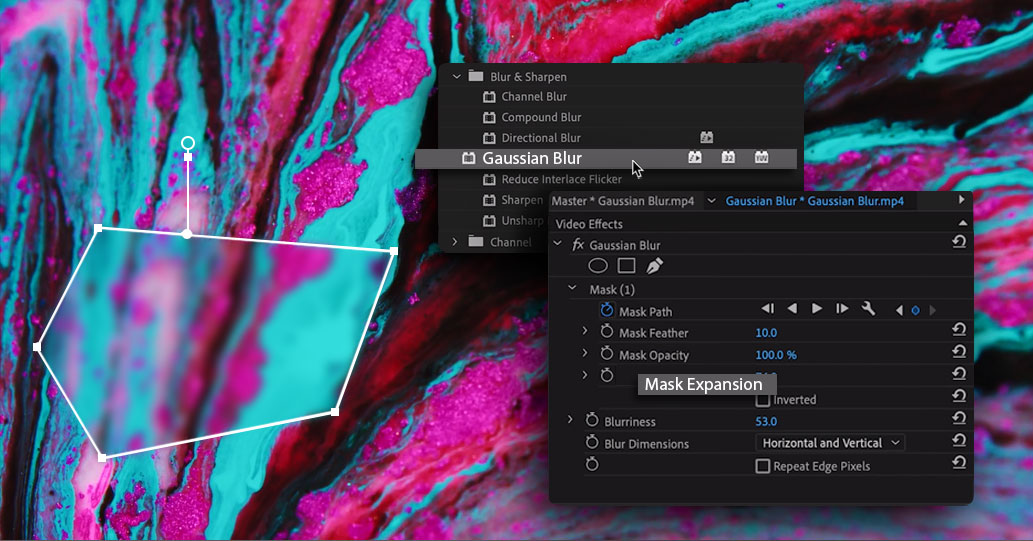 While we are talking about blurry stuff, let’s take a look at Unsharp Mask. Unsharp Mask is almost like sharpen but more intelligent. Normally when you apply sharpen it will sharpen the whole image in a dummy way. But Unsharp Mask tries its best to keep the out of focus sections untouched and just sharpen the in focus subject. It is not perfect but does make a difference. 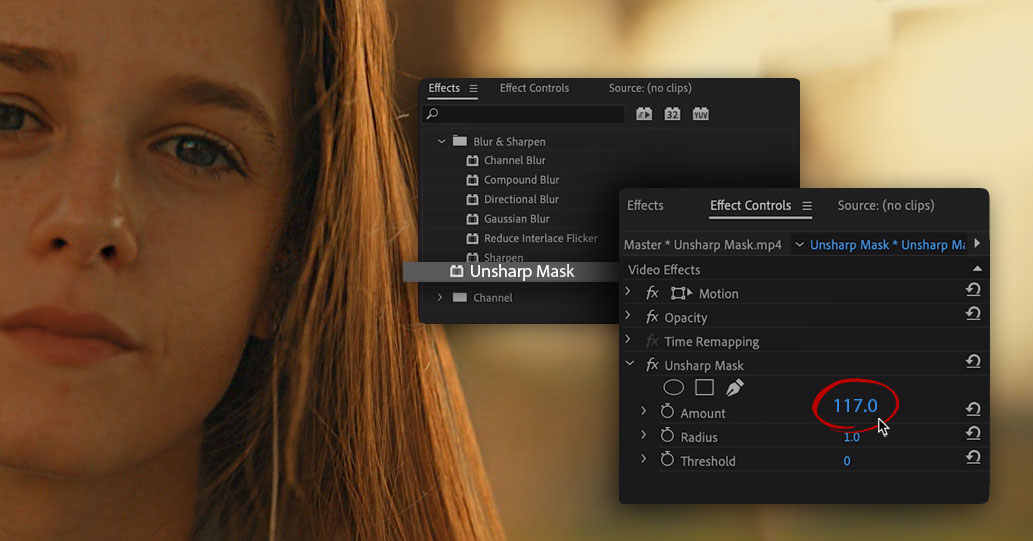 Invert is an effect that is easy to understand. Adding Invert to your footage will give you the option to invert different aspects of your video like color or light. It does look really cool but please use it responsibly. 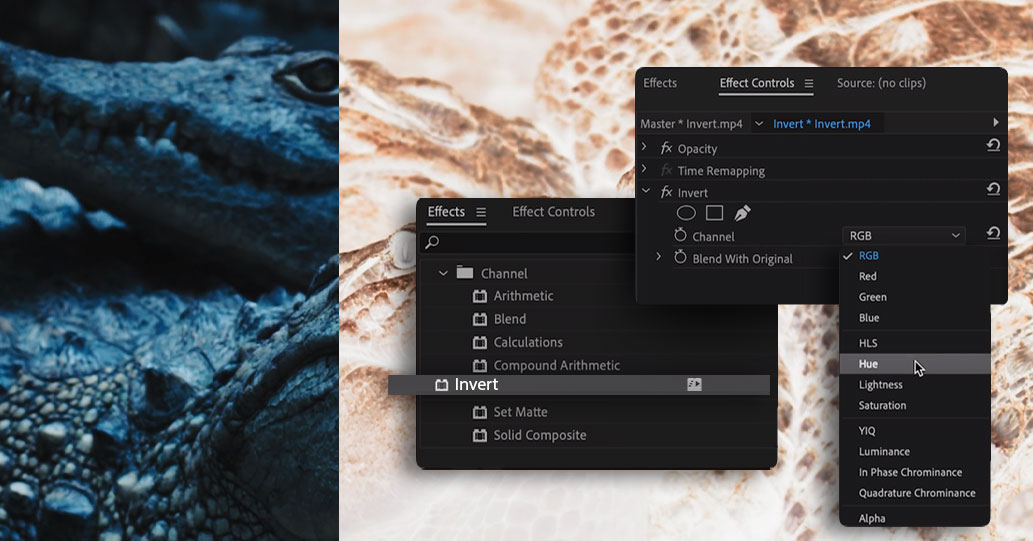 Warp Stabilizer is a life saver especially for the times you may not have access to a good tripod for stabilizing your camera. Unless you are trying to convey some sort of an atmosphere, a shaky video is never cool. So your best friend here is going to be Warp Stabilizer to get rid of all the shakiness.

This effect can do wonders but you have to keep in mind that since the main way it works is to zoom in on the footage, it is highly recommended to have a high quality video in order to mitigate any blurriness. 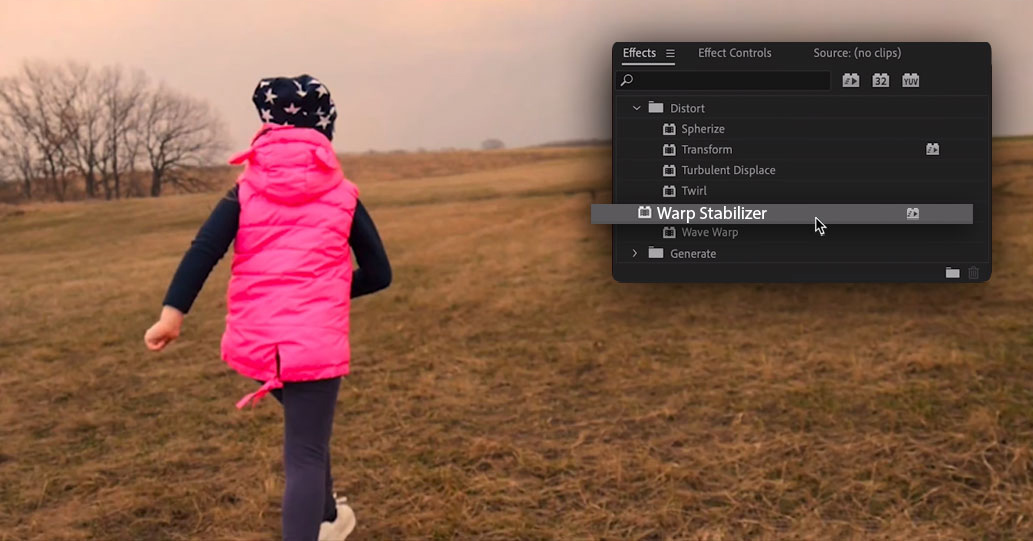 Now let’s do a whimsical one! 4 Color Gradient is an effect that can generate many different atmospheres for a single footage. Changing these colors to any combination can tell a different story in any instance. Changing the blending mode can also be helpful for better conveying the feel.

For example, choosing Screen and going with blue will make cold and maybe mysterious atmosphere while going with orange is a full on summer party! 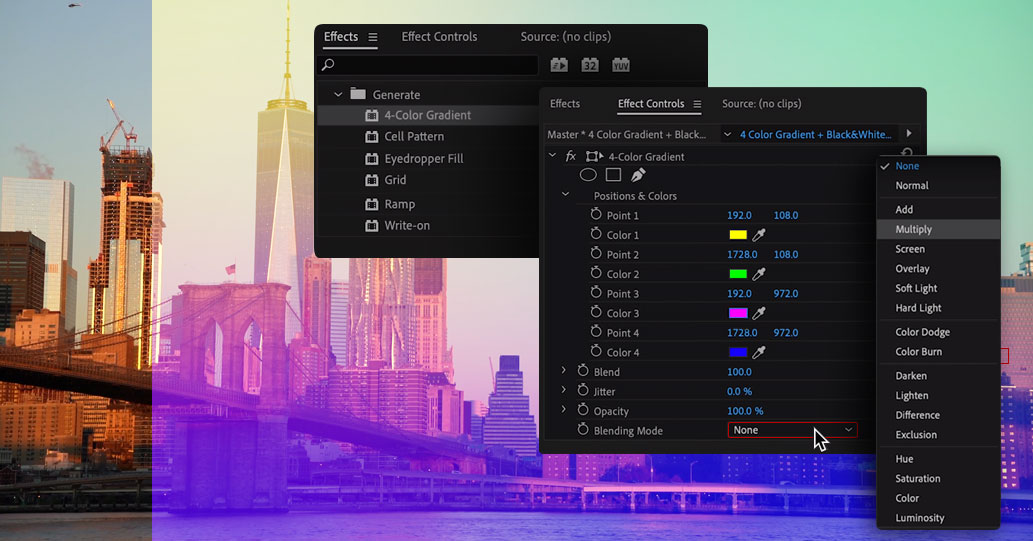 Now that we have talked about making a footage more colorful, let’s talk about the other end of the spectrum! What I’m talking about is the Black and White effect. We all know how cool black and white videos are! Especially since premiere has made it extremely easy to make them, just drag and drop the effect onto your footage and boom! We are Chaplin now!

But if you want to have more control over the amount of saturation you have in your black and white footage, using Tint effect can be a better option. 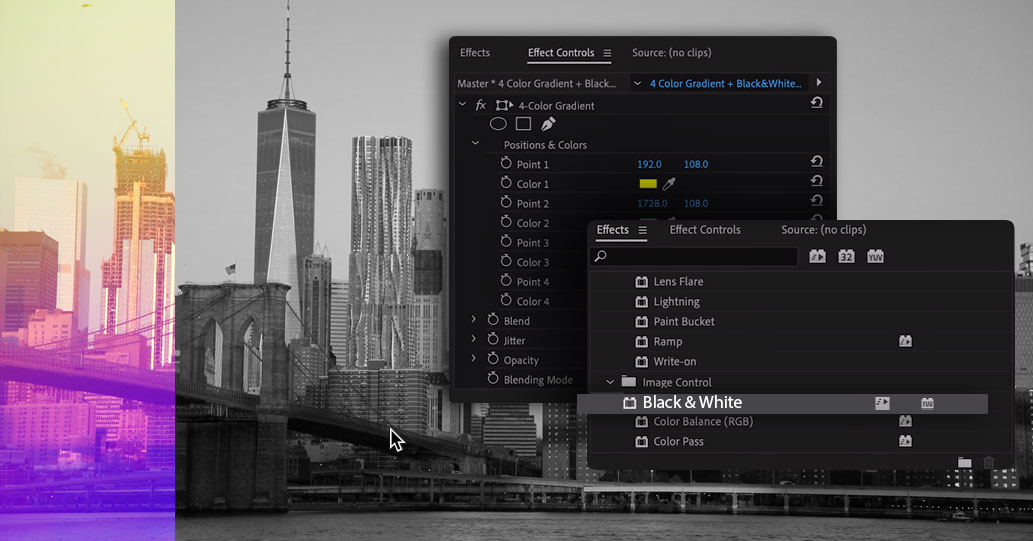 OK, next we are going to another effect that is a great tool for both beginners and professionals. Ultra Key is the effect that can really help you merge two footages easy peasy.

The best and most optimal way of using Ultra Key is to have a green screen. Then all I have to do is put the footage on top of the one I want to fill the green parts, add Ultra key, Choose the green color with color picker and done!
Of course you can do this with any color present in the footage but it may turn into a mess. It is best to always keep keying in mind when shooting because trying to do it afterwards can turn into a huge pain. 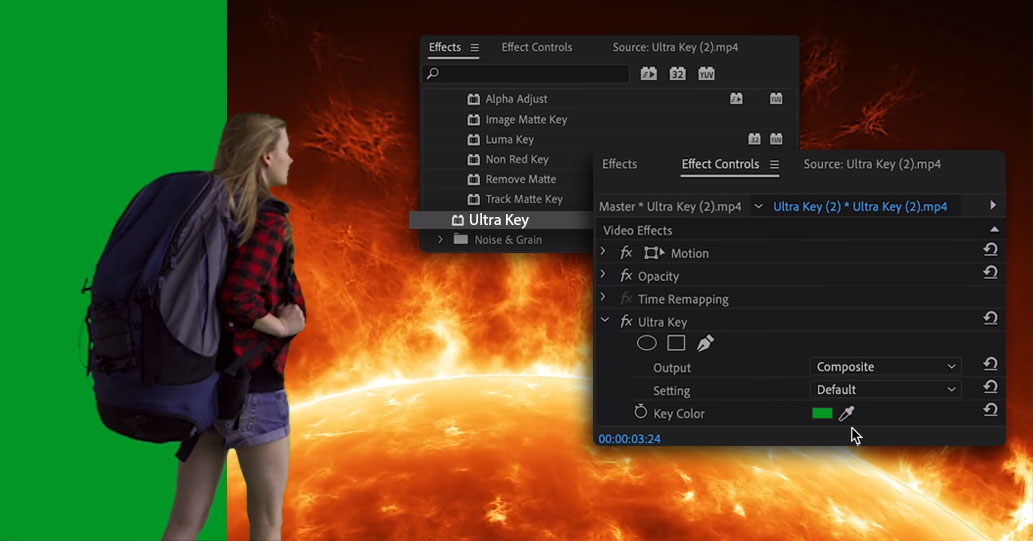 Generally you want to get rid of it, but sometimes it is really cool to add some noise to your footage. Maybe you want to make the footage look old, or sometimes I have used noise for “Memory” sequences, especially for the ones which are supposed to be fuzzy. So never underestimate this effect! 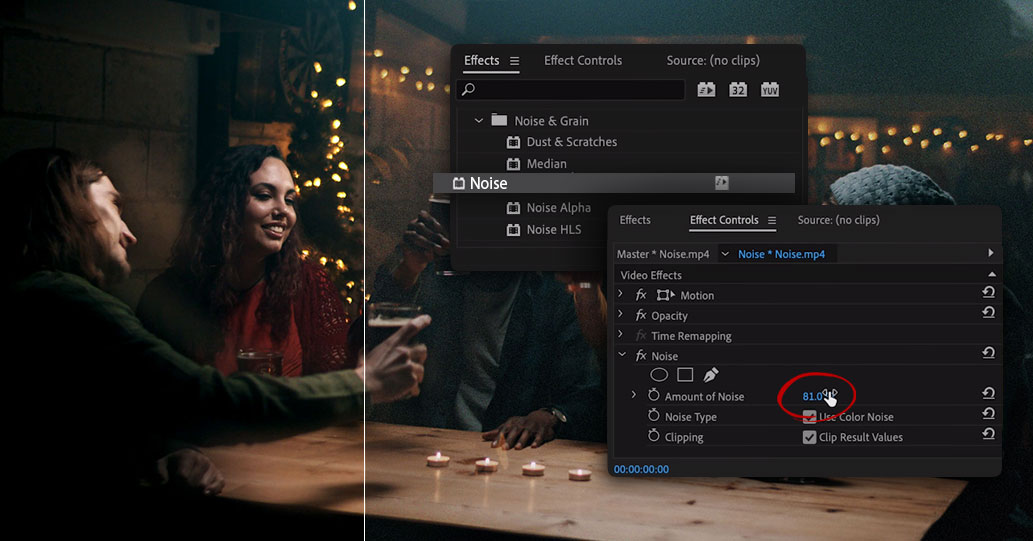 Drop shadow is the other effect that I believe can be helpful for the times you want something to pop in the footage. For example, a text that blends with the footage can be really hard to read, but the moment I add “Drop Shadow”, it becomes a piece of art! Easy to read and friendly to the eyes.

In effects control panel you can work on angels, distance, and other stuff in order to make the shadow more natural to the eye. 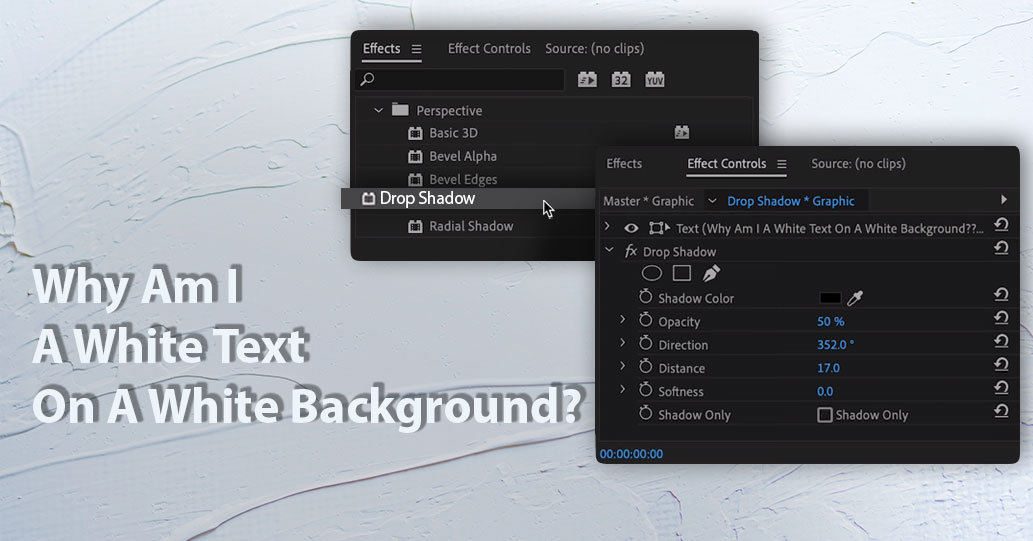 But man this thing looks great. In effects control panel you can set the delay time and add or remove the number of echoes. Using this effect at the right time can make it really influence the viewers so be careful how and where you use it. 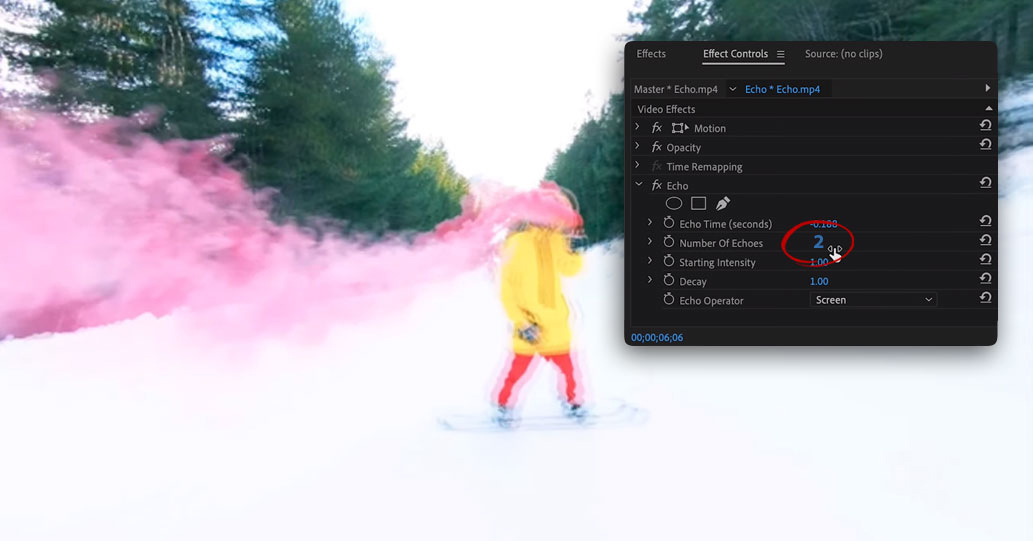 The next effect is crop. Yes, “Crop”! It may sound a bit weird to consider crop as an effect but that is exactly the point! Crop is like the wrench in your toolbox, you never think highly of it, but it is such a useful tool that your work will be hellish without it!
One of the most useful ways that Crop can be helpful is to create transitions. For example, I can keyframe my footage at the beginning and the end. Then on the end keyframes I will change the values all to 50 and done! Simple but elegant.

The other use for Crop is to create a cinematic effect. As you may know we generally consume media at 16:9 aspect ratio, and sometimes 18:9 on smartphones. Almost all our monitors and TVs are the same aspect ratio, but cinema screens are at 21:9. That’s why when you watch a movie on your TV, you will see those black bars at the top and bottom. And that’s where the crop effect comes to the rescue. By cropping top and bottom part of your footage you can create the illusion of a Cinema screen. Smokes and mirrors! 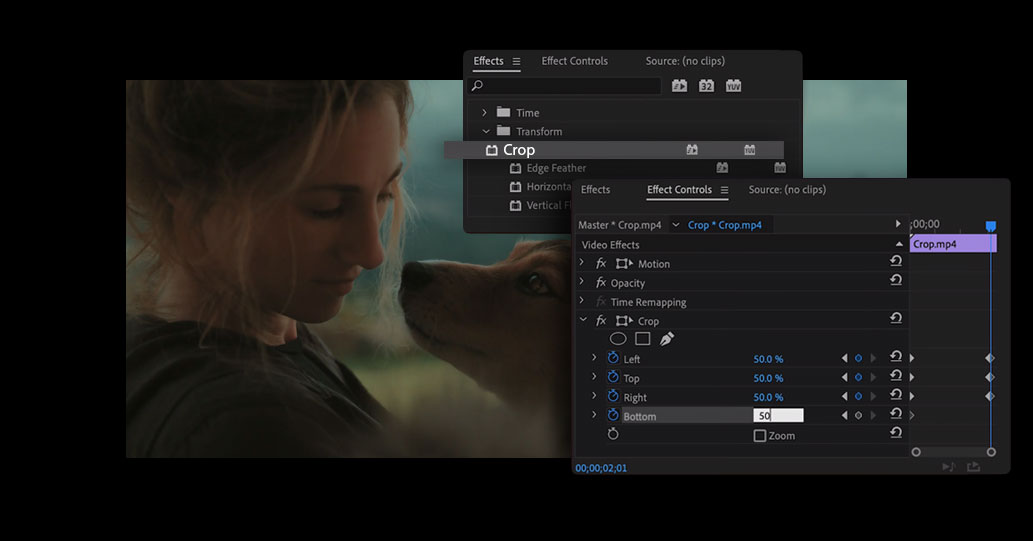 Now let’s talk about an easy effect ! Horizontal and Vertical Flips are as simple as it gets, just add them to the footage and flip. They don’t even have any settings to tweak, flipping easy! 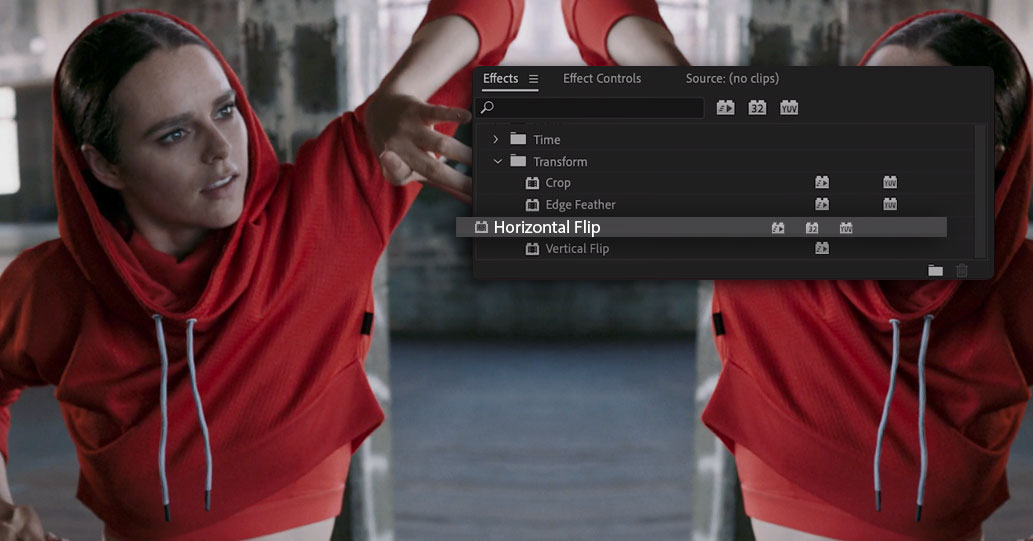 The other set of effects, which are actually transitions, Gradient, Linear, and Radial Wipes. They are really easy to work with, and that is what I love about them, simple and functional. My favorite is the Gradient Wipe because it is amazing for closing a shot. Just adding it to the footage and keyframing it is all you need to do in order to get a great shot. 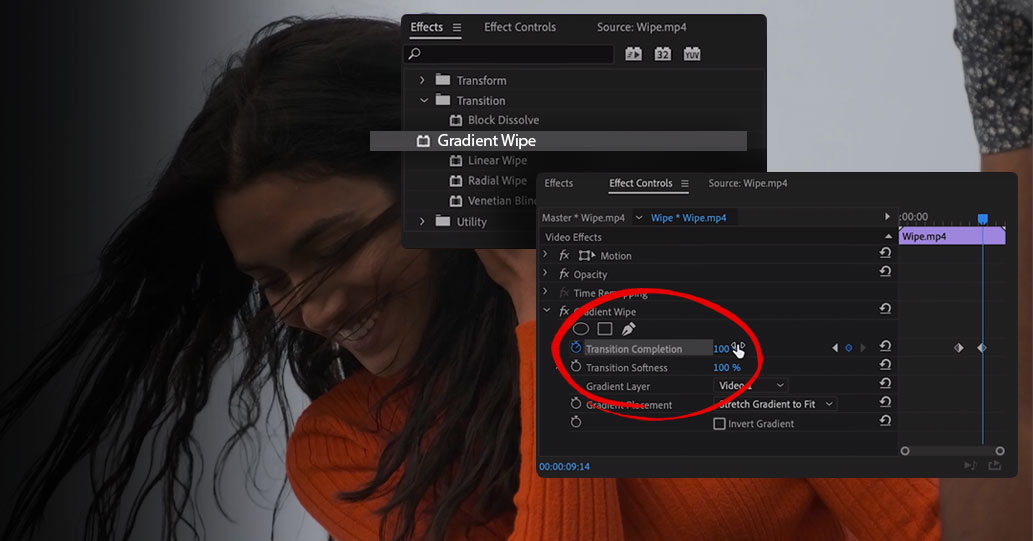 OK that’s about it. Of course there are lots of amazing effects built into Adobe Premiere Pro and tastes may differ based on the situation. So please let me know in the comment your suggestions and opinions about different effects.

May you have a great edit time!